This was first published in the Mobile Media Memo newsletter.  Quickly subscribe here.

These are going to sting a little. You ready?

Mobile is disrupting all aspects of the media business – behavior, revenue and brand – and we have yet to experience the full extent of its bite.

“I think things are probably much, much worse industry-wise than people acknowledge,” The Awl’s John Herrman explained to The Verge. “It is, to the web, what the web was to what came before it.”

This time, it’s not just print in the crosshairs. It’s everyone.

2. Everyone is a frenemy

The friend vs. frenemy argument is absurd. Everyone is a frenemy these days, battling for the same eyeballs and the same revenue which advertisers pay to reach them.

Technology companies are looking more like media companies, hiring their own editors. Some partnerships are complementary, others are substitutional, and it’s increasingly difficult to decipher which is which. That’s in large part because…

3. Opinions are drowning out facts

In an industry that’s more competitive and complex than ever, it’s nearly impossible to get the straight scoop on anything. Companies are extremely protective of mobile performance metrics, and partnership details are secured under NDAs.

Meanwhile, the explosion of user behavior data inside media companies creates its own cloud of confusion. There’s so much data, you can pretty much justify any plan of action with the right subset of numbers. It’s hard to know what’s really working.

Adding insult to injury, some pundits and tech writers are forming their own conclusions without any real data to support their opinions. They praise startups that aren’t growing and criticize partnerships that are working. The net effect is a growing sense of confusion.

I’d recommend reading mobile-savvy analysts like Benedict Evans with A16Z, Ben Thompson of Stratechery and Frederic Filloux of Monday Note. They have a good grasp on the product and business sides, and that’s where we should be paying attention.

As history has shown us, users always gravitate toward user experiences that are faster, easier and better. And as an industry, they’ve gravitated away from us, consuming our content through superior mobile experiences.

More people get news from Facebook – 41% of U.S. adults – than any other source. That’s because it’s a faster, better and easier experience to get news.

Told you this would sting.

Sure, the tech giants have more resources, but let’s be honest: our industry isn’t known for obsessing about our users (for example, see “News sites are fatter and slower than ever.”) Few media organizations practice human-centered design, product teams are a relatively new phenomenon and most mobile media products still do just one thing: display abbreviated content from a single brand.

Let’s stop calling them sites; they’re apps. Facebook is an app. Twitter is an app. Snapchat is an app. Apple News is an app. Netflix is an app. Some of them also have sites that get a small fraction of their overall traffic (~ 15% for FB and Twitter), but the distribution disruption is driven almost entirely by apps and the ecosystems designed to make them flourish.

Most of your web referrals are viewed in someone else’s app.

Apps are easier, faster and better for this sort of thing (Facebook “Instant Articles” is exhibit A), and apps are extending into new devices: wearables, TVs and cars, where web browsers are nowhere to be found. Apple and Google are incentivized to keep it that way.

6. Websites are in behavioral decline

“I hate browsing the web on my phone,” admits The Verge’s Nilay Patel. Everyone does.

Users don’t type in URLs on their phones. They tap apps, they tap links in apps, they tap notifications, they search in the device’s built-in search bar and they increasingly use Siri and Google Voice to search. When users are looking at a web page on a phone, they’re almost always doing it inside an app (which they think is the app, not a website.)

As mobile grows, user behavior is shifting from websites to apps as the entry points. Or as Sergio Nouvel calls it in UX Magazine, it’s a “shift from web pages to digital products, tools and ecosystems.”

Yes, we all love the openness of the web, but the industry needs to skip through the stages of grief to “acceptance” as quickly as possible. No, websites aren’t dead. But they’re in a steep decline for the foreseeable future. Once we realize the depth of this behavioral shift, the more we understand how to capitalize on it.

7. We now have a battle on two fronts

I’m not suggesting we abandon our websites or stop working with Facebook, Apple, YouTube and the rest of the mega-distributors. To the contrary, we should continue to maximize social and search referrals while relentlessly experimenting with distributed content. That’s the first front.

But you can’t fight on the first front without fighting on the second. I don’t know about you, but I’m not punting on direct relationships with our users. Since this industry is obsessed with BuzzFeed, I’ll use them as an example: while everyone buzzes about BuzzFeed’s social distribution, the company has built up a mobile app arm with a larger product staff than most of its competitors.

The second front is more expensive, competitive and risky than the first, but we don’t have a choice.

When starting to brainstorm an app or an email product, the discussion almost always begins with how to take existing content and “shorten” it for mobile.

Just shortening your website content for a mobile app — video included — is like putting radio on TV: adding a camera that shows the host talking awkwardly into a microphone. It’s the price of entry perhaps, but it doesn’t guarantee an audience. A beautiful design is great, too, but it doesn’t mean people will keep using it: 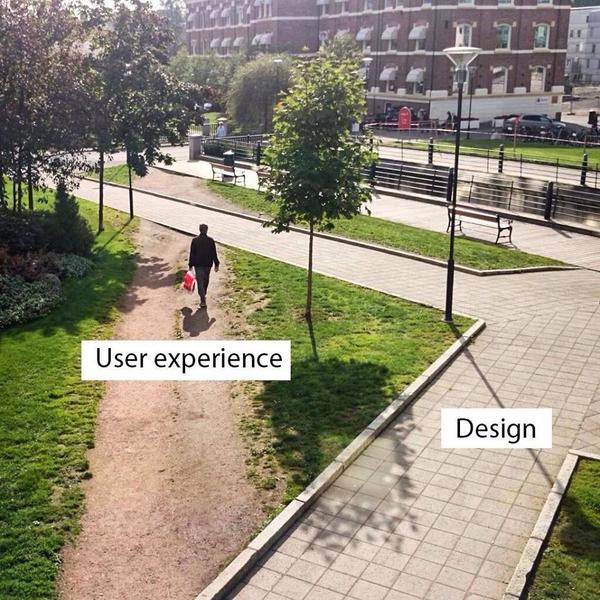 Even worse with mobile, it certainly doesn’t guarantee any revenue.

9. Starting with solutions is suicide

These days “media businesses require either massive scale, or a niche built upon a vein of gold,” says Sam Gerstenzang, who ran product at Imgur before joining A16Z. The easy “gets” are gone, and if you fall in the middle, you fall through the world.

That’s why we need start with a problem. Laura Javier, a product designer at Facebook, says it best: “fall in love with a problem, not a specific solution.”

“Life’s too short to build something that nobody wants,” adds Nikkel Blaase, a UX designer at XING. “How can we be sure to tackle a real problem? Alas, we can‘t be 100% sure, but we can minimize the risk a lot by observing and talking to people.”

This is the core of human-centered design, and we can increase our chances of success by considering problems that go beyond news consumption. At the ONA’s Mobile Design Camp in Seattle last Friday, the group came up with better products for solving “gift giving” problems than “news filtering” problems. What about tackling information-related problems with health care, travel, retail, transportation or finance?

Dig broader and bigger to find new veins of gold.

Diversifying our mobile products will help our industry counter an increasingly dire situation on the advertising front.

Mobile display revenue is projected to surpass desktop in 2018 (PwC), but Facebook and Google still account for half of mobile’s take (eMarketer) and programmatic is gobbling up large chunks of inventory.

“The future for most publishers is likely that of pure content production only, save for the few [which are] capable of selling native advertising in stream (or selling subscriptions),” writes Ben Thompson, who paints a grim picture of programmatic ads and Safari ad blockers.

For lean-and-mean content companies, that might be good news. For companies with legacy media costs, perhaps not so much. Video is clearly a bright spot, but incumbents are faced with new competitors – for example, BuzzFeed has 30 video jobs open right now – and programmatic pre-rolls are beginning to see some traction.

11. Many of the best product people don’t want to work in big media

They want to work at startups.

That’s why we should act more like startups ourselves by tackling hard problems, bending the rules, embracing failure, exuding patience, having fun and handing our product talent massive amounts of freedom (i.e. stop telling them what to do and when to do it.)

Success with product begins with people.

12. The industry is playing defense

In the last few years, media companies have been thrown against the ropes, suddenly playing more defense than offense. This is especially true of the news business, which is in the midst of its greatest disruption of all. This is a business that doesn’t like to play defense.

So let’s play offense. Swing bigger, invest more, experiment more, measure more. Accept that we don’t know all the answers. If we believe the hard truths of mobile disruption, we’ll double down on the challenge before us.